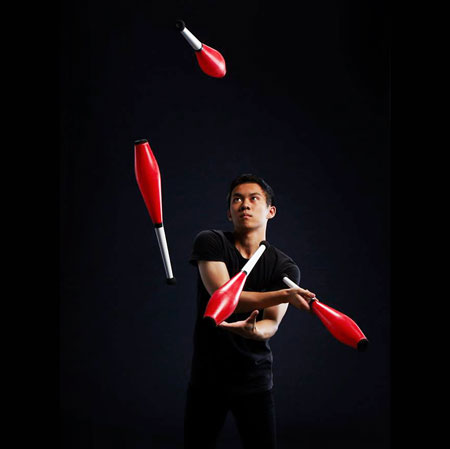 REASONS TO BOOK
World-class, record breaking juggler will amaze guests with his range of skills and unusual style
Gold medallist at the World Juggling Championships in Las Vegas
Versatile juggler can tailor his act to a theme either for the stage or as a roving performance
Clients include Samsung, SAP, Telstra at private and public events, conventions and corporate functions
Based in Sydney, Australia and available for events worldwide
Circus Entertainment, Juggling and Diablo Act, Jugglers and Diablo, Family Walk Around Acts, Walkabout Entertainment, Family Entertainment

This incredibly versatile and dynamic world-class juggler is based in Sydney, Australia, and has been stunning spectators with his incredible juggling skills for over 10 years. Achievements include being a gold medallist at the World Juggling Championships in Las Vegas as well as breaking numerous juggling world records such as the first Australian to juggle 8 clubs.

Our World-Class Juggler Australia is a totally incredible circus performer who takes this art form to new levels. What this guy does with juggling props is absolutely astonishing and will rekindle everyone’s love of juggling. Defying all traditions and stereotypes, the Sydney juggler manipulates object mid-air, throws the objects in completely unconventional ways and uses his body in many different ways to make a real spectacle. Your guests will be wanting to keep their eyes on him to be sure not miss one of his very clever tricks.

The circus performer’s extremely impressive juggling includes a range of balls, rings, clubs, glow-in-the-dark juggling props, knives and fire torches. The World-Class Juggler Australia can also perform hat manipulation, plate spinning and juggling whilst riding a unicycle. He is a very compliable circus performer who can tailor his act and appearance according to an event theme. He can be booked for stage acts or roving performances throughout an event.

The Sydney juggler has performed at private and public events, conventions and festivals and worked for corporate clients such as Samsung, SAP and Telstra at the likes of The Star Sydney Casino, International Convention Centre Sydney, Four Seasons Hotel and Luna Park. He has taught juggling workshops in public schools and appeared on Australian and US television shows.

Contact us at Scarlett Entertainment to book a world-class juggler for your event in Australia or anywhere around the world.