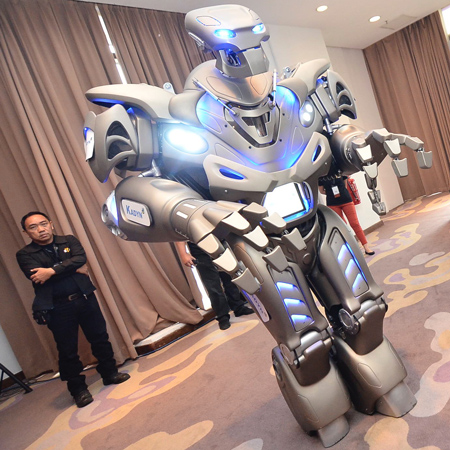 Titan the Robot is an entertainment concept unlike anything on earth and is used by event management companies worldwide to add something very special any festival, corporate party or as the ultimate in shopping mall entertainment. Our walk around robot is always very popular at festivals, trade shows, shopping centres, not to mention Halloween, Bonfire Night and Christmas events. This roaming entertainment is totally unique and unlike anything most people have ever experienced.

The walkaround robot has appeared on TV shows such as Big Brother, Daybreak and The Gadget Show as well as popping up at many prestigious events including the Abu Dhabi F1 Grand Prix, Sochi Winter Olympics and the UK premier of iRobot and Real Steel.

Titan The Robot has also worked alongside superstars including Rihanna, Will Smith and Jackie Chan and has travelled the world with appearances in countries such as USA, Dubai, China, Vietnam and Thailand.

To find out more about booking this unique walk around robot get in touch with our team of Entertainment Experts.