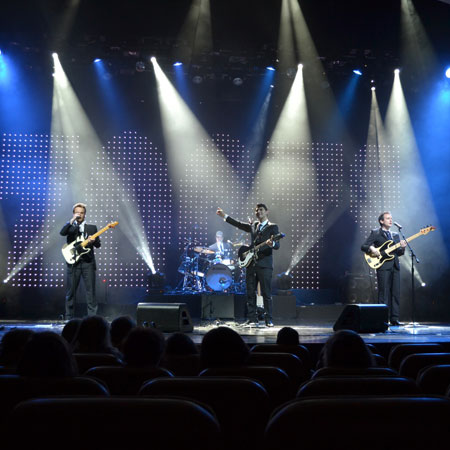 REASONS TO BOOK
Guaranteed to get your dance floor packed and WOW your guests
Perform extensive 1960s repertoire, including The Beatles, The Beach Boys, The Monkees, Elvis and many more
Performed over 1000 shows in 500 venues and toured over 30 countries
Previous clients include British Airways, Microsoft, Manchester United and Toyota
Based in the UK and available to perform at events worldwide
1960s and 1970s, Live Music and DJ, Themed Entertainment, Cover Bands

The act are a party rocking, foots-a-tapping, hands-a-clapping, you’re-a-dancin' kind of band which you just can't help but fall in love with. Bringing the twist and shout authenticity of the 60s with them, this party rock band create a fun, energetic and far out vibe.

With authentic 60s equipment, costumes, dancing and vocals, the five-piece rock band has it all, down to the shift-dress wearing female tambourine player. Their sharp suits, vintage guitars and Cardyne microphones give any venue a groovy makeover. Whether you’re planning a rock n roll wedding or a nostalgia product launch, the band bring the decade swinging into your venue. Capable of playing most stage-spaces, they reassure you that you’re getting the best at every turn.

The Showband offer customisable sets of favourites taken from their existing 60s repertoire, allowing you to build the party around you. Always keen to go the extra mile, our 60s Showband get together with you before your event to discuss any way they can enhance you and your guests’ experience. This can include anything from renditions of tunes from the 50s to the present, to visiting the venue in advance to choreograph the perfect entrance.

This party rock band take bookings for a host of events including parties, theatre shows, festivals and weddings spanning more than 30 countries. From Israel to Italy, Finland to France, Sweden to Spain, the global reach of this talented group knows no limits.

The list of happy clients for this band include many high-profile brands such as Sony, Toyota and Manchester United FC. Take a look at their testimonials and previous clients to see if they’re right for you. Due to the high demand of this band, enquire today to ensure you get the 60s act that everyone’s talking about.

Save The Date Magazine

" An excellent performance at the Goodwood Revival Meeting 2016. We were particularly impressed by the band's enthusiasm and interaction with the audience during sets. The band arrived in plenty of time paying full attention to the access and set-up instructions provided. With over 200 performers on site, we were extremely pleased with the band's professionalism and 'no fuss' approach! "

" The kind of talented, young band it's impossible not to like. Breezing through a tight show, they looked sharp, totally confident in their ability to entertain. "