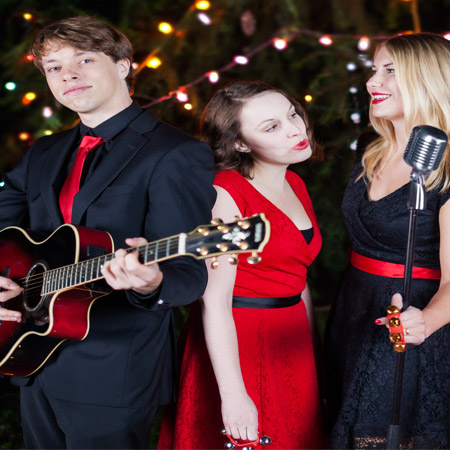 Bringing extra sparkle to the festive season, this professional function band will be the icing on top of the Christmas cake at your event. Usually performing as a fabulous 4-piece band, they can add up to 6 extra members for large-scale occasions.

Their varied repertoire of Christmas classics covers everything from traditional carols and vintage Frank Sinatra tunes to modern festive hits by the likes of Wham and Mariah Carey. Bringing a jazz-swing feel to their performances, the band are perfect for glitzy corporate parties, awards evenings and other wintery events.

They have performed for numerous high profile clients including Anglo-Eastern, Audi and Cadburys and never fail to delight audiences with their festive dress and warm personalities. Enquire today to ensure that your guests' Christmas is full of yuletide joy!

" I just wanted to say a huge thank you to you and the band for creating a fantastic atmosphere at our Christmas Media Party last night. We've had some wonderful feedback about the event, and you and the band went down a storm. The music was pitched just right and really added a touch of class. From both Anna and I a huge thank you, it was lovely working together. "

" I just wanted to pass on my utmost thanks to you and all the guys for being so marvelous on Friday at Barbara Knox’s birthday party.Barbara was absolutely thrilled with you all and the entire building has been buzzing with tales of the party and how much everybody enjoyed it. The atmosphere and ambience were a direct result of you and the band who kept the party swinging and swaying well into the night.Please do pass on my thanks to you and the rest of the guys. "

With utmost thanks. Ross Adams, Assistant to Producer – Coronation Street