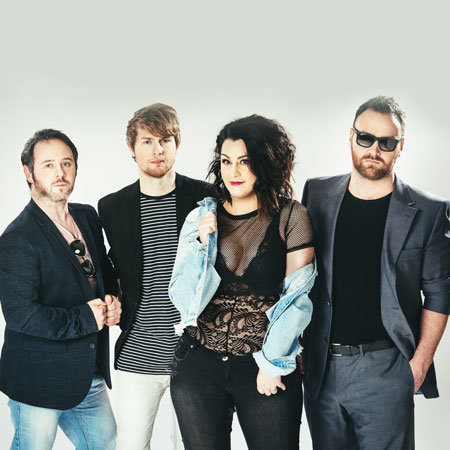 Transport your guests to one of the golden era’s of music with our incredible 80s party band. Back comb your hair, grab your best suit jacket with massive shoulder pads, roll up the sleeves, put on some Raybans and let this stunning 80s tribute show take you on a fun-packed nostalgia trip down memory lane.

Our 80’s tribute band has an astonishing repertoire of songs. You can see a small sample above. The 80s tribute show is full of some of the very best hits and classics ranging from 80s pop to crowd pleasing rock classics. The fully tailorable 80s tribute show has everything from Duran Duran, Wham and Chaka Khan to Queen, Bon Jovi, Journey and Guns N’ Roses. This high impact show is flawlessly delivered with enthusiasm and top of the range musicianship.

The wonderful 80s tribute band features some of the UK’s finest session musicians and is fronted by a very charismatic female singer. They are highly sought after for events all over the country and very versatile in line-up options. A standard performance consists of five members; one singer and four musicians.  There are options to add more musicians as well as a brass section and dancers going right up to a full 12-piece band. Alternatively, you can book the enigmatic female singer to perform solo with backing tracks.

Ideal for Private parties, NYE celebrations, Christmas parties, weddings, special occasions and themed events, the 80s party band can also include a DJ to play classic tunes before and after the band.

Contact our team at Scarlett Entertainment to book them for you next party.

" You guys were awesome. You absolutely made our party! "