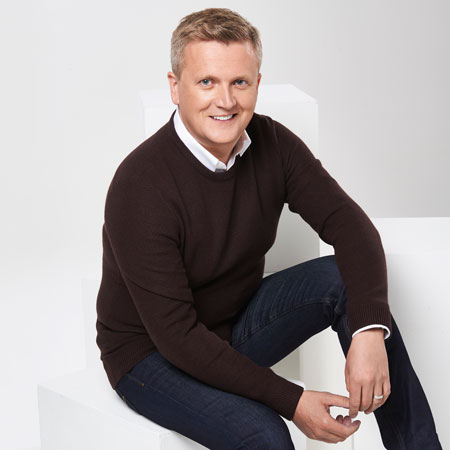 REASONS TO BOOK
British national treasure known for singing, radio and TV presenting
A Platinum album-selling artist who has released over 30 albums
Former child star known for singing the hit song from The Snowman
Has been honoured with an MBE and a BASCA Gold Badge Award
Renowned for his knowledge and contribution to classical music
Speakers and Hosts, Presenters,Comperes and Event Hosts, Talent and TV Show Personalities, Famous Musicians,Bands and DJs

Aled Jones has had an extraordinary career over the past three decades.  He is the original crossover star and has sung for the Pope and the Royal Family, received an MBE, released over 30  albums, with over 10 million album sales and counting and has over  40 Silver, Gold and Platinum Discs.

From child star to national treasure

After beginning his career at the age of 12, Aled Jones became one of the world’s most successful boy sopranos, releasing 12 hit albums in 4 years with the defining moment being ‘Walking in the Air’, the hit song from the animated film The Snowman.

As a broadcaster, he has forged an extensive career, having worked for BBC Radio 2 and 3, and BBC Radio Wales. Aled also hosts the Classic  FM  Sunday  Breakfast Show and has become a popular favourite on the station and enjoyed his own magazine show ITV Weekend. Aled continues to record and perform alongside his radio and TV career.

One Voice reached no.3 position in the UK Official Album Charts in 2016 – selling more units in the first week of sales than former One Direction’s Zayn Malik and held the no.1 spot on the Classical Chart for 14 weeks -gaining silver BPI status. Later that year, One Voice at Christmas shot to no.1 in the Classical  Chart, selling over an impressive  60,000 units during these  4 weeks and making  One Voice and One Voice At Christmas the 2 top-selling classical albums of 2016 in the UK.

Aled’s successful trip to Australia earlier in 2017 saw him secure a No 1 with One Voice.  This was followed up later in the year with an Australian Tour where Aled secured another top spot in the Australian charts with One Voice At Christmas.

Not content with international success, Aled rounded off 2017 with the final instalment of his One Voice album trilogy One Voice: Believe, going straight to No 1 in the Classical Charts back at home in the UK.

One  Voice: Believe  was a collection  of  spiritual  classics and saw Aled  duetting with  his younger self - man and boy, but also featured a few special surprises: for the very first time, the Classic  FM  presenter was  joined  by  his  12-year-old son Lucas, to duet on one of Aled’s favourites  hymns, The  Lord  is  My  Shepherd, arranged  by  Howard  Goodall. An incredibly tender and heartfelt rendition brought this beautiful trilogy to a stunning finale.

Australia released One Voice: Believe in July this year and boasted a triumphant chart week as One  Voice: Believe rapidly climbed up to No.  5 in the Overall  Physical  Albums  Chart. It made it to the Top  20 of the Overall  Albums Chart before its digital release and 18 weeks later broke all records as it continued its reign at No 1 in the Classical Chart. Before boarding a flight to Australia in September to embark upon an extensive tour Aled conquered his fears by ‘walking in the air’ on the wing of a plane for Classic FM Global’s Make Some Noise charity.

In November 2018 Aled and Russell Watson released a stunning new album together, In Harmony,  a beautiful collection of hymns, arias and popular songs which entered the UK album charts at No 8. They will be touring together in September and October 2019.