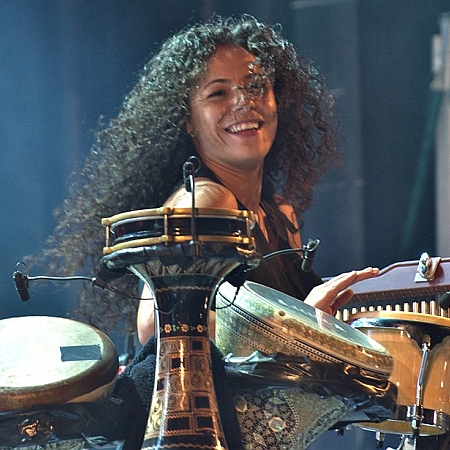 REASONS TO BOOK
The very first professional arabic female percussionist in the world
A fusion of house and classic Arabic remixes, with or without a DJ
Perfect for corporate events, cultural shows, festivals, club parties
Toured with a big success in Europe, Asia, Africa, USA & India
Based in Denmark & available to perform at events worldwide
Drumming and Percussion, Arabic, Live Music and DJ, World and Cultural Acts

Born in Germany from Palestinian parents, Percussion Player Simona later moved to Denmark where she became the first ever professional female musician from an Arabic background.

Teaching herself to play the percussion since she was 15, this lady of tenacity and determination is making waves in the world music scene, having played in many international music festivals around the globe.

An accomplished percussionist able to play a wide range of instruments, her favourite is the Daburka - a traditional goblet-shaped Arabic drum. With this, she can create soulful beats that have become her trademark of quality. She has toured with a big success in Europe, Asia, Africa, USA, India and Scandinavia, and collaborated with top artists, the likes of Natacha Atlas, Donna Cadogan, Aura Dione, Danish Rocklegends, and Casper Christiansen.

Percussion Player Simona draws her inspiration from all kinds of musical genres including house, electronic, pop ambient, oriental and world music. An accomplished artist that has roamed the world because of her talent, Arabic Percussionist Player is perfect for corporate events, solo shows, club parties, voice and instrumental concerts.