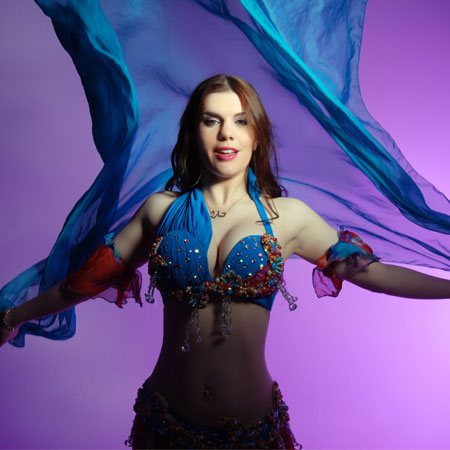 Tara has been dancing Arabic dance professionally for over 12 years and has worked all over the UK as well as abroad. She is experienced in all belly dance styles as well as Arabic folk dance and the Egyptian Tanoura dance and Sufi Whirling Dervish Style.

Tara has held long term dance contracts in both Cairo and Sharm El Sheik. Tara gained over 9 months stage experience working in famous theatres like the Theatre of Art in Downtown Cairo, and working for the famous Roman Theatre in Sharm. Whilst in Egypt Tara worked and trained intensively with some of the most famous choreographers and directors in Egypt.

Other Experiences in Egypt include working for Egyptian film and television (channels 1 and 3) as well as performing for The Sultan of Oman in the Sinai desert.

As well as Egypt, Tara has performed in other Arab countries, including Dubai, Lebanon, Palestine, Abu Dhabi and Oman.

Outside of the Arab world Tara has performed in Japan, Germany, Gambia, France, Spain, Austria, and The British Virgin Islands. Tara worked for 2 years in Japan working in some of Tokyo’s most well known Arabic venues and for many corporate events.

Tara now resides in London where she dances almost every night working at high profile events and venues. Tara has worked at over 50 of London’s Middle Eastern restaurants and venues, as well as five star hotels such as Claridges, Dorchester and Mandarin Oriental.

Highlights of her career include performing for the Royal Family of Brunei, The Sultan of Oman, and for members of the Jordanian and Saudi Royal Families.  Tara is also the Guinness World Record holder for the most amount of Sufi Whirls in one hour.