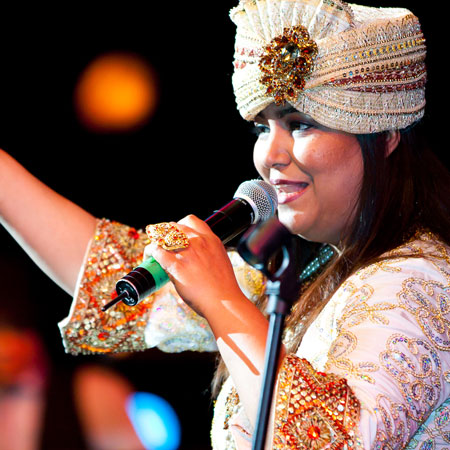 A foremost live Bollywood band from London, UK offers Bollywood music in a range of styles, from Indian Folk, Love songs and soul-shaking Bollywood classics to Bhangra.  To add an exotic kick they also have team of colourful and charismatic Bollywood dancers who create a virtual world of Bollywood Cinema.  The band also has their own VJ (Video Jockey) to create authentic background visuals from Bollywood movies while the band & dancers are performing.

Musical director and band leader of group has got over 30 years of experience of Bollywood, Indian and world music. He has performed more than 4000 concerts worldwide. He has also worked with Bollywood music directors and Bollywood music arrangers. He has composed and produce Bollywood style music album with Bollywood orchestra in Mumbai.

The band has performed for Her Majesty The Queen of Britain and Prince Charles for The Commonwealth Day, Universal Pictures, Ministry Of Tourism Oman, Goldman Sachs, Louis Vitton, BBC, Royal National Theatre London, The National Trust, The Festival of  The Sea (Portsmouth), The Riverside Festival in Nottingham, The Ethno Dance Festival in Moscow, the Mayor of London and many more. Also in Never Mind The Buzzcocks (where they did a rousing version of ‘Cotton Eye Joe’ with Bill Bailey, Danny Alan, David Jones-Mcfly, Simon Amstell and Phill Jupitus) – even a two-night stint performing alongside Bill Bailey in front of 20,000 people at the Wembley arena.

They are capable of performing very diverse music for any requirement. Slow, fast, Old, new Bollywood songs. The band's repertoire is huge from 1960s to very latest and also perform Indian Folk music and Bollywood songs based on folk song.