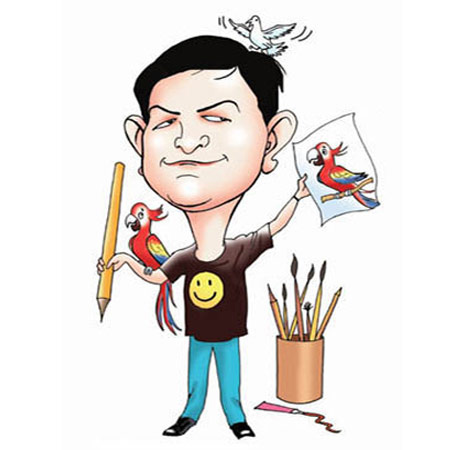 REASONS TO BOOK
Self taught, multiple award-winning Indian caricaturist
He has worked as a political cartoonist and illustrated for over 50 books
Has had his caricatures published in leading Indian newspapers
Live event artist works quickly to capture great likenesses in a humorous style
Based in New Delhi, India and available to perform at events worldwide
Art Based Entertainment, Walkabout Entertainment, Caricaturists, Caricature Artists

Our cartoonist is an award-winning caricaturist who has worked as a political cartoonist for leading newspapers like Dainik Jagran, Hindustan and Indian Nation, and illustrated more than 50 books.

He started to draw cartoons right from his early childhood. Self-taught, he got his cartoons and caricatures published in several journals including fortnightly Khojbin and monthly Cartoon Watch, while he was still in school.

As a caricaturist, he has worked for leading newspapers like the Hindustan Times and the Dainik Jagran, and illustrated several books.

Live event caricaturist works quickly to capture great likenesses in a humorous style, which fills the room with laughter and leaves your guests with a personal and unique gift to remember the day with. Your guests will love seeing each other in a totally different way.