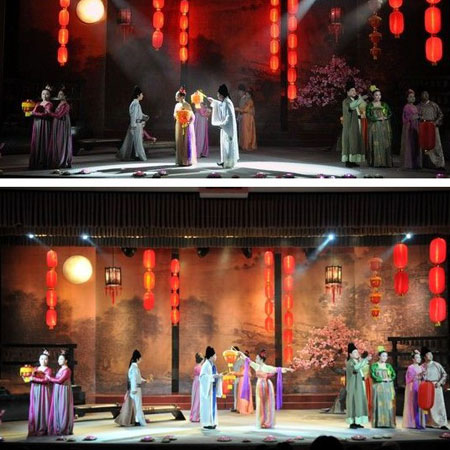 This traditional Chinese musical theatre performance is perfect for long-term events in shopping malls, theatres and cruise ships as well as one-off events that require a sensational after dinner show!

These professional performers enact a stunning love story that will touch the hearts of any audience. Beautiful costumes and make-up, elaborate staging and props and enchanting music combine to take audiences on an immersive journey following the lives of a dashing scholar named Deny and a charming girl called Yue.

Meeting one night at the magical Lantern Festival, Deny and Yue fall and love but circumstances conspire to keep them apart until Yue’s father decides to hold a music contest to find Yue a husband. Deny determinedly does his best to win over Yue’s father but he refuses, until secret poems passed between the two lovers come to light and, greatly touched, Yue’s father promises their marriage. As they are wed the couple live happily ever after.

An uplifting story beautifully produced, this musical theatre production will not fail to impress audiences at your event.