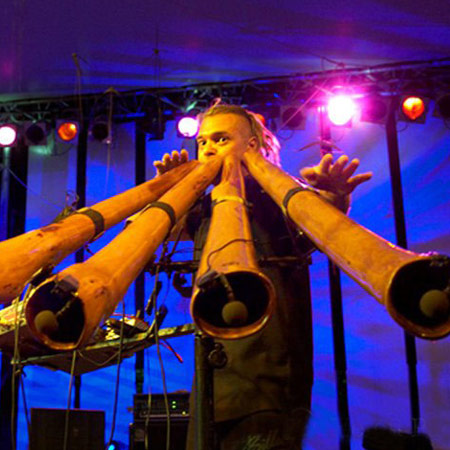 This high energy Didgeridoo performance group from Humpty Doo, Australia have sold well over 60,000 albums from the streets to the stage. Making them one of the hottest underground success stories to emerge from the top end of Australia.

Lead didgeridoo player Mark, has been on both the professional busking circuit and high profile performance circuit for over 17 yrs. Mark has collaborated with many artists over the years and has recorded over 15 albums to date.

Touring and performing all over the world and Australia, from street shows to East Coast Blues & Roots and Big Day Outs, including Canada and Europe.

Their latest project is collaboration with Australia's largest fireworks group, Howard & Sons Pyrotechnics. They were approached by the boys to collaborate for Territory Day in the Top End. From there emerged 'The Bang Collective’, a world first Pyrotechnics Musical.

With a live Didgeridoo performance like you’ve never seen before and pyrotechnics by Australia’s most innovative, The Colours of the Outback promises to deliver a uniquely ‘Australian’ explosive experience.

" Didgeridoo Act are the most successful independent act in the Northern Territory. They deserve recognition for this. "

" Didgeridoo Act have opened for many conferences, award ceremonies and functions around the world and deliver a world class performance guaranteed to be talked about and remembered for a lifetime! "