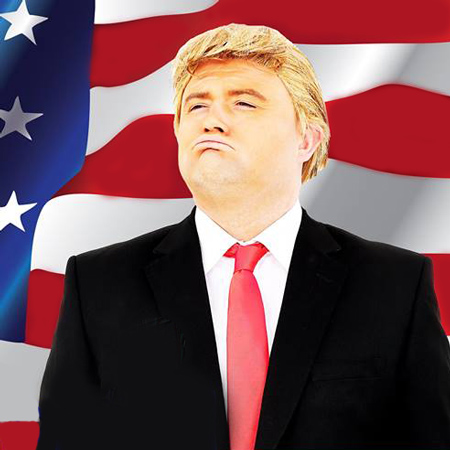 One of history’s most controversial politicians, unlikely presidential candidate and highly successful business man, Donald Trump is now a household name. Loved by many and despised by just as many, Trump is a peculiar character with an interesting story. Our celebrity lookalike act is one of the UK’s leading Donald Trump Impersonators who will bring the Trump experience to your event to entertain the guests.

This professional comedian has perfectly mastered Trump’s mannerisms, speech and looks. He is a very talented celebrity lookalike and impersonator with years of experience who has previously appeared on Britain’s Got Talent. His Donald Trump tribute act was recently used by Sky News for a rap battle with a Hillary Clinton impersonator. You have to watch the video above.

Our celebrity lookalike will meet and greet your guests or could be a walkabout act. Being a professional comedian, this impersonator will provide you with a 20 minute stand-up routine. In this, he talks of the the troubles he has to face being president, which countries he looks up to, and his love for music, yes people didn’t know that the Trump can sing. He also shares a few secrets about his celebrity friends that he could not spout out on television and how deep his Bromance really is with Nigel Farage. The performance is accompanied by music and songs he has written for his wife Marlena.

The Donald Trump tribute act is guaranteed to have your guests cracking up with laughter. Well worth booking for corporate events, weddings, and birthday parties or as a celebrity lookalike to hand out awards at ceremonies. The possibilities are as high as Trumps promised wall.

Our Trump Impersonator can produce the 'greatest ever' personalised video for you, just watch the one he did for us and for Tattoo Fixers (Channel 4 / Studio Lambert Limited) above.

Speak to one of our entertainment specialists at Scarlett Entertainment for a guaranteed experience your guests will not forget.

" He was brilliant – really sounded like him and just got stuck in. I think he’ll be appearing on a lot of people’s social media "