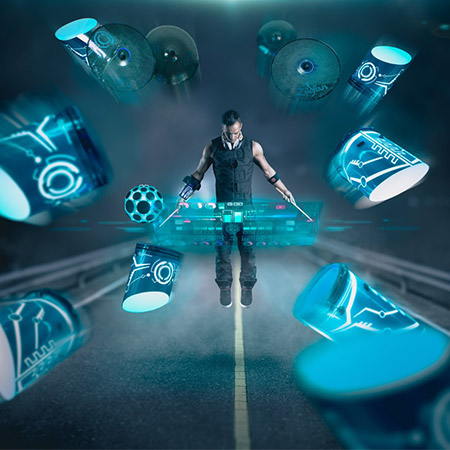 REASONS TO BOOK
Crowned the Highest Tech DJ on the continent by popular Mechanics Magazine
Performed in over 25 countries opening for superstars such as Katy Perry and Jason Derulo
The one and only artist to be using this custom built machine
Perfect for Parties, festivals, fashion shows and artist collaborations
Based in Las Vegas, available to perform at events worldwide
Latest Technology Acts, DJ with Musicians, Live Music and DJ, LED and Glow Act, Drumming and Percussion

Drum Machine launches as an unprecedented, technological music phenomenon. Utilising a one-of-a-kind 55'' transparent Holoscreen, accompanied by 13 light drums and cymbals, this state of the art, custom designed machine was built to rock dance floors around the world.

With a degree in music and production, Shannon continues to innovate and change the industries traditional view of drumming, and is considered the founder of a new genre of music, Aggressive Percussion! His talents are recognised with the nominations of two South African Music Awards, as the director of the MNET Music special 'PLAY IT TO BREAK IT' and producer of the dance album 'PERCUSSIVE HOUSE GROOVES'.

He has performed in over 25 countries, collaborated with and opened for many international super stars such as Katy Perry, 30 Seconds to Mars, Fat Boy Slim, Goo Goo Dolls, Westlife, Shaggy, Sean Paul, Live, Peter Gabriel, Ja Rule, Korn and more.

The future of the DJ is Drum Machine... step inside!

" Just when you thought electronic music couldn’t get any hotter, Drum Machine proves it can! "

" The highest tech DJ on the continent "