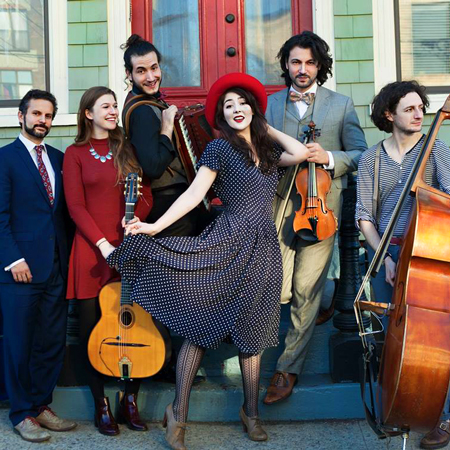 REASONS TO BOOK
French and American Swing Jazz band based in New York
Take you back to the Parisian era of the 1930's and 1940's
a repertoire of timeless American standards and French jazz songs
Invited by the French Ambassador to give private concerts in Washington
Have performed in the hottest clubs and venues in the city
Live Music and DJ, World and Cultural Acts, Themed Entertainment, Jazz,Swing,Blues and Jive, French, French and Parisian

They offer listeners a ride in a time machine and bring them back to the Parisian era of the 1930′s and 1940′s. It’s a bridge between the old world and the new, between French charm and American glam, with just a pinch of bohemian and a spoonful of swing... the best medicine for you troubled sleepers out there! With the melodious voice of Franco-American singer Tatiana Eva-Marie and the Gypsy jazz sound of violin and guitar made famous by Django and Grappelli, all the ingredients are gathered to make it hot and keep you swinging all night...

Ever since its creation, the band has performed in the hottest clubs and venues in the city, from hidden speakeasies to the Oak Room at the Plaza. In July 2012 they were invited by the French Ambassador to give two private concerts in Washington for the French National Day and represent the expansion of French culture in the United States.

Get in touch with us to book this wonderful vintage French-style jazz band for your event.

" Thank you so much for coming down to play at the event. Our guests raved about the music, and it was such a treat to play them music reminiscent of the time and place of when so much of the art at the Barnes was created. I hope you and the rest of the band enjoyed it as much as we did. "

Anne Farnum-Messano, at the Barnes Foundation

" We were able to catch the last 20 minutes of your performance and could not be more pleased! We’re so sorry we didn’t get to greet you or thank you in person, but honestly we could not be happier with our cocktail hour. You guys did an amazing job and we’re so lucky to have your band play on our wedding day. Our guests were gushing about how beautiful Tatiana’s voice was! "

" The jazz band were just perfect for the occasion of opening the Barnes Foundation on Friday night. Your music is really charming and different, and played so well. Chuck Gayton and I thank you for all you did to make the evening such a success. Thanks again and warm regards to you, Tatiana and the band. "

" Adrien, you and the band sounded amazing and looked fantastic. People have been talking about you and I have been sure to pass along your information. Thank you again for helping make our Wedding weekend special. Your CD has been getting played lots. "

" Thank you so much for putting on a great show at Oval Kids! The crowd was small but everyone had fun and you all sounded phenomenal!! "