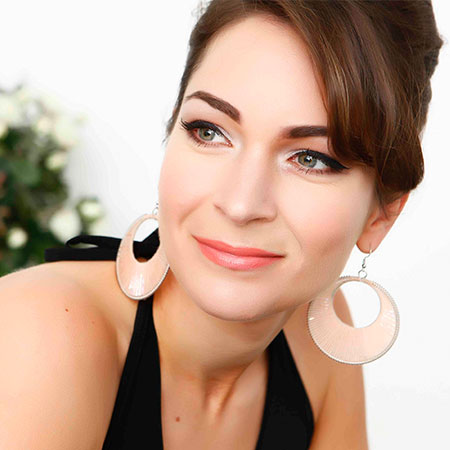 Professional French Jazz Singer Gabrielle is a London and Southern France based artist who performs a range of Jazz standards, Bossa Novas, French songs and Tango music in English and French.

She grew up surrounded by musical influences and began singing at a young age. As soon as she was ready, Gabrielle participated in competitions where she won local and national singing competitions. One of the early highlights of her career was when she reached the finals of the French “Pop Idol” in 2003.

Today, Gabrielle is in high demand at elegant UK events, performing for cocktail receptions, background dinner music as well full concert performances. She has been performing professionally for the last 8 years and is known for singing the French repertoire in a very elegant and jazzy way.

Gabrielle has performed live on BBC Radio 4 'Loose Ends' and at the Royal Festival Hall with Aurora Orchestra. She has also starred at the St James Theatre for the EFG London Jazz Festival and as part of the Jazz Diva series. Some of her previous clients include renowned brands such as Kensington Palace, Rothschild family, Coutts Bank, Tiffany & Co.

Throughout her career, Gabrielle has collaborated with notable musical figures such as Mimi Verderame and Jean-Louis Daulne, and pop star Lara Fabian; her works receiving praise and accolade in the international music scene.

French Jazz Singer Gabrielle has toured UK and abroad performing in various venues, she can perform as a solo artist as well as alongside other musicians. Her repertoire includes songs in French and English. With her classy and elegant style, Gabrielle will add just the right kind of entertainment glamour for any event.

Contact our in-house team of Entertainment Experts today and make an enquiry.

Jazz FM with ‘Notes from Paris’ Album of the week