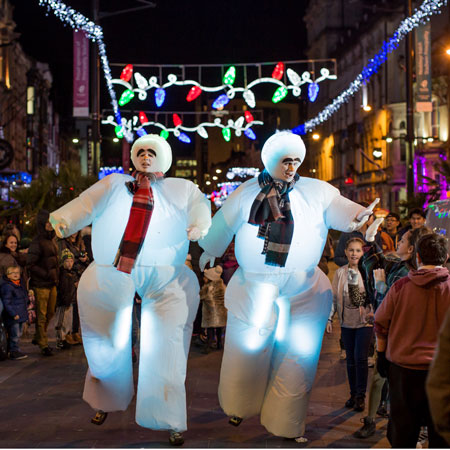 These roaming snowmen are a larger-than-life Christmas act that win the hearts of everyone they encounter. Christmas entertainment seldom comes bigger than this, as this snowman act promenades your event hugging people and putting smiles on everyone’s faces.

Standing at a towering eight-foot tall, the snowmen - clad in tartan scarves - rove your event, meeting and greeting your audience. On bouncy stilts, they will be seen bobbing up and down above the heads of guests. Given that they also light up, they are an eye-catching festive act that no one can miss.

These two snowmen are intriguing characters that kids can’t help but be enthralled by. Soft, cuddly and glowing, these gentle giants bring the festive spirit to every Christmas event and offer a lot of banter between them. The snowman act can stop for a big, cold hug or bounce along as part of a parade.

This fun act is ideally suited to shopping streets, Christmas lights ceremonies, winter parades, festive expos and large-scale events of a yuletide nature. Having worked with an array of noteworthy clients, including Microsoft, IBM, Bloomberg, Harley Davidson and the Australian Grand Prix, this act are highly experienced and know how to ensure the best possible results.

Any audience of any age or any language will be able to appreciate this fun, bouncing festive act, making them a sure fire success in any country. Able to perform over three thirty-minute sets, audiences have ample chance to get to know these friendly, chilly characters. They can be used at brand activations and product launches around the festive season, as well as just a buoyant presence for Christmas entertainment.