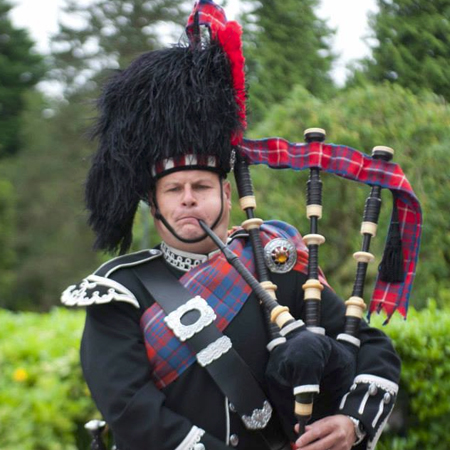 REASONS TO BOOK
Performed in every continent in the world over the past thirty years
Played for her Majesty Queen Elizabeth II & the British Prime Minister
Popular with wedding ceremonies, funerals, burns events, gala dinners...
Previous corporate clients include British Airways, T Mobile, BT...
Based in Durham & available to perform at events throughout the UK
Live Music and DJ, Scottish, Bagpipers, World and Cultural Acts

After playing the pipes for over 30 years on every continent, Jim considers himself an experienced piper. Originally from Alloa, Central Scotland, he joined the Army at sixteen years of age, receiving instruction at the Army School of Bagpipe Music at Bridge of Don Aberdeen. Subsequently, he studied at the Army school of Piping in Edinburgh Castle. Jim served with The 1st Battalion The Argyll And Sutherland Highlanders.

He has played for members of the Royal Family including Her Majesty Queen Elizabeth II as well as for both British and Australian Prime Ministers.