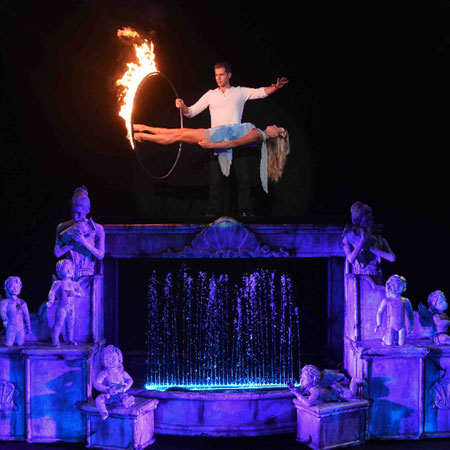 REASONS TO BOOK
An international talent, known as “The Top Illusionist in the World”; he is an America's Got Talent finalist
The youngest magician in history to receive the prestigious Merlin Award, he has guested on shows for NBC, Netflix, ABC and CBS
Rob presents awe-inspiring story-telling on the grandest scale and has performed sell-out shows around the world
With over 70 million YouTube views, he is a truly fascinating grand illusionist and Broadway stage magician
Based in Atlantic City and available to perform at events worldwide and can also offer virtual show
Cabaret and Stage Shows, Magic and Illusion, Talent and TV Show Personalities, Magic and Illusion Show, Illusionist, Magic Stage Show, TV Show Talent Acts, Virtual Entertainment, Virtual Magicians

Illusionist Rob is an international talent, known worldwide for his sell-out performances, coast-to-coast in the USA and on record-setting performances across Europe, Australia, Japan, and even at The White House.

Named “The Top Illusionist in the World” by the world’s largest gaming organisation, Rob is internationally renowned for his mesmerising and award-winning shows.

In 2008, he became the youngest magician in history to receive the prestigious Merlin Award – as International Stage Magician of the Year. This award is considered magic’s highest honour, the industry equivalent of the Oscar, Emmy, Grammy, and Tony.

As a fascinating grand illusionist, Rob’s work has been witnessed by millions of people on network television, in Times Square, on the Las Vegas strip, Atlantic City, and before sold-out audiences in casinos, arenas, and theatres worldwide.

" The Magic Was Spellbinding! The show was very entertaining. He was amazing! Enjoyed it very much. Favourite moment: The motor cycle trick! Just Fabulous! "

" Went to the show tonight at the Taj Mahal and it was incredible!!! Performance was mind blowing and was definitely appropriate for kids. And the length of the show was great as well…maybe an hour and a half..? Crowd interaction was great and Rob was very funny!!! "

" One word: AMAZING!!!!! Also I got called up on stage…! So Exciting! He is such a beautiful talent and funny too. Absolutely loved the show! "