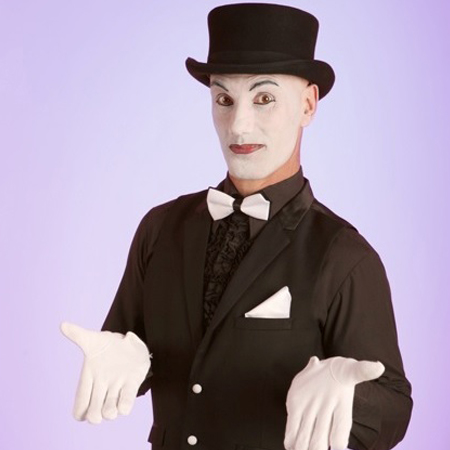 REASONS TO BOOK
Multi-skilled entertainer popular with corporate and street theatre events
Can perform as a mime artist, contact juggler and visual actor
Has performed at two private parties for Her Majesty the Queen
Previous corporate clients include Microsoft, Rolls Royce, RBS
Based in the UK and available to perform at events worldwide
Walkabout Entertainment, Mime Artists

Jason is a multi-skilled entertainer based in the UK. A mime artist and contact juggling specialist, he zigzags between corporate entertainment and street theatre events. A former international athlete, Jason can offer a variety of entertainment for your event including:-

The Golden Doorman, The Ice People or glow juggling

Since 1987, Jason has performed in more than 20 countries and his highlights include; 2 private parties for Her Majesty the Queen, performances for blue chip companies including Microsoft, Rolls Royce and RBS, and performance tours of Botswana, Oman and Turkey funded by the British Council.

" Jason was a great hit at the Khareef festivaI, I would recommend him strongly and warmly. "

" Jason went down extremely well with our audience, and was a pleasure to work with "

" Jason, you were wonderful...everybody loved you "

" The Queen enjoyed herself immensely’. Thank you so much for your wonderful work. "