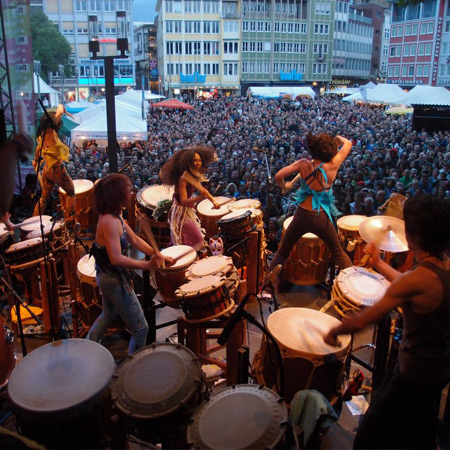 REASONS TO BOOK
A renowned tribal groove orchestra mixing tradition with pop
Produce original grooves woven with Japanese Taiko drums
Take audiences on a mesmerising trip between trance and ecstasy
Highly recognised, they have performed for Coca Cola and ZDF
Based in Tokyo and available to perform at events worldwide
World and Cultural Acts, Drumming and Percussion, Japanese Acts, Live Music and DJ

These Japanese Drummer’s are a tribal groove orchestra, with beats that rise freely between the East and the West, tradition and pop. No matter where the drummers perform, at major World and Roots, Rock and Pop or alternative Music and Culture festivals, in live clubs, classic theatres and concert halls or at techno events, they take everyone on a mesmerising trip between trance and ecstasy with their goose-bumps music.

Consisting of seven female and four male drummers, the group capture their audience with original grooves woven with Japanese Taiko drums. On stage the 11 musicians create with almost 40 drums a music-spectacle beyond imagination. Music-wise they are one of the most sophisticated percussion groups of the present.

The cosmic beats and uniquely complex poly-rhythms are of such primal nature that they reflect all known music styles and consequently unite people of all ages, ethnic and social origins and of any taste in music.

These talented Japanese Drummers are highly recognised among the circles of traditional Taiko. They took the chance to perform with several highly achieved artists such as Korea’s Kim Duk-soo of SamulNori, West Africa’s djembe player Mamady Keita, and Seiichi Tanaka of the San Francisco Taiko Ensemble.

They have performed for the renowned WOMAD Festival, for concerts in Belgrade, Sarajevo and Zagreb, the concert in Zegrab was also broadcasted live and nationwide. In addition the drummers have performed live and without playback on Germany's major national TV station ZDF and Coca Cola used their tracks Fu-Zing and Rai-Zing for their TV commercial campaign in Japan.

Taking audiences on a cultural experience, their music reflects all different aspects of musical diversity and interaction.