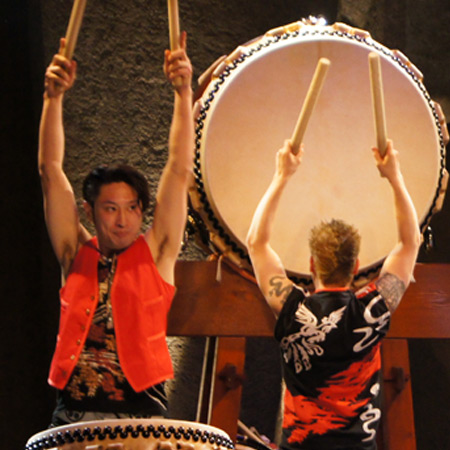 REASONS TO BOOK
They present Taiko drumming in a modern and theatrical style
Dramatic, high-energy entertainment option that captivates audiences
Have toured the world, from the US, Caribbean, and South East Asia
Collaborated on the soundtrack for Korea TV Drama, 'The Legend'
Based in Japan and available to perform at events worldwide
Japanese Acts, Drumming and Percussion, Live Music and DJ, World and Cultural Acts

Taiko is a drumming style of Japanese origin. Borrowing on thousands of years of tradition, Taiko groups are now taking the style worldwide. Taiko promises to be the first native Japanese music to spread through the world.

Drumming enthusiast Daisuke, who was born and raised in Hyogo prefecture, founded this Japanese Taiko group in 2008. Daisuke learned percussion instruments at a young age and switched to Japanese Taiko in his early 20's.

He made the move to Tokyo in 2003, playing in various professional groups before embarking on a solo career to pursue his own sound. Daisuke recruited two rising stars in the Taiko world to form his Japanese Taiko Entertainment group

The group has since grown and together the members have toured the world, from the US, Caribbean, and South East Asia and have also collaborated on various projects such as the soundtrack for Korea TV Drama "The Legend” and Japanese pop group EXILE.