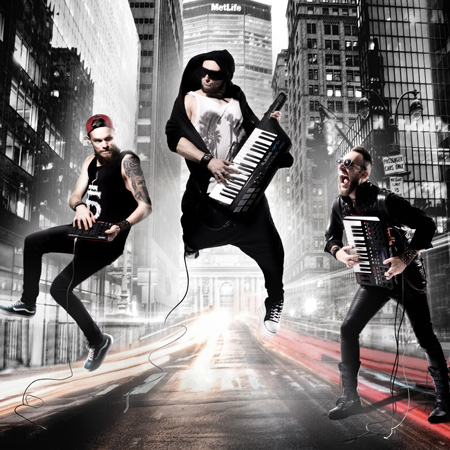 REASONS TO BOOK
Incredible live EDM covers band mash up indie and rock songs with electro house
The only live EDM electro house band performing with no backing tracks or pre-recorded parts
Guaranteed to bring a lively live performance to any venue or event
Their music has featured as the soundtrack to the Junior Eurovision Song Contest 2015
Electronic music band based in Belarus and available internationally
Specialist Musicians, Live Music and DJ, 1980s and 1990s, DJ with Musicians, Themed Entertainment, Cover Bands

Live electronic music entertainment doesn’t get much more exciting than this. This incredible one of a kind and ingenious live EDM covers band are taking live music entertainment to the next level. These really talented musicians seamlessly mash up well known indie, rock and pop songs with electro house. The covers band bring all the energy of a high end big name DJ set but all done live!

This innovative covers band is the only band performing live EDM music with parts electro, house, dubstep and trap. Their electronic music compositions feature no backing tracks or pre-recorded parts. Everything they perform is played live through real instruments and other parts are looped using the latest music software. It is cutting edge live music entertainment.

The crowd will get the experience of a rock and DJ show, but all in one. The covers band will have the audience captivated and engaged. Their is something here for many music fans. The familiarity of the rock and pop songs right through to the upbeat rhythms of the electro house. They provide a high energy show that will get the crowd to the dance floor and have the audience singing along with hands up in the air. Checkout the setlist for a taster of some of the songs they re-work during their set. Their covers are not covers but reinterpretations of the originals.

The live EDM band have had many features of TV programs. Their cover of the ethnic Belarusian song "Камарыкi" titled "Daisy Chain" was used by First National Channel as the soundtrack for Junior Eurovision Song Contest in 2015. They have performed their incredible show in China and in Russia.

This is a covers band with a difference. To book these incredible talented musicians to perform at your event or venue, get in touch with one of our team members at Scarlett Entertainment.