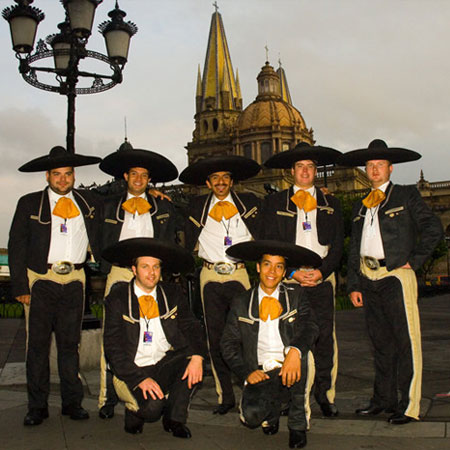 REASONS TO BOOK
Canada's Premier Mariachi Band, established for over a decade
Share the passion, love & respect for this internationally recognised art
Their distinct look has landed them in commercials on CBC, CTV & Global TV
Have shared the stage with many international acts such as Big Sugar
Based in Vancouver, Canada & available to perform at events worldwide
Mexican, Walkabout Musical Acts, World and Cultural Acts, Mariachi Bands, Walkabout Entertainment, Live Music and DJ

Canada's Premier Mariachi Band was established in the city of Vancouver in 2003 will the goal of bringing the traditional music of Mexico, to Canada.

Mariachi Band Canada are well known through Western Canada for their mixture of Canadian and Mexican talent. These musicians deliver the passion, love and respect they feel for México and its culture. One of the missions of Mariachi Band Canada is to maintain and promote the beauty of Mexico through its traditional and uplifting music.

Mariachi Band Canada have been sharing the passion, love and respect for this internationally recognised art form for over a decade. The band have played at events and festivals across western Canada, in the US and Mexico, with feature performances at the 2010 Vancouver Winter Olympics, the 2011 and 2012 Calgary Stampede and a number of times at the Guadalajara International Mariachi Festival.

They have shared the stage with many international acts including Big Sugar, Mariachi Vargas and Mariachi Los Camperos, widely hailed as Mexico’s top mariachi groups.

Their distinct look has landed them in commercials and they have been featured on CBC CTV, City TV, Global TV, Omni TV, Shaw Television and National TV stations in Mexico TV Azteca and Televisa.