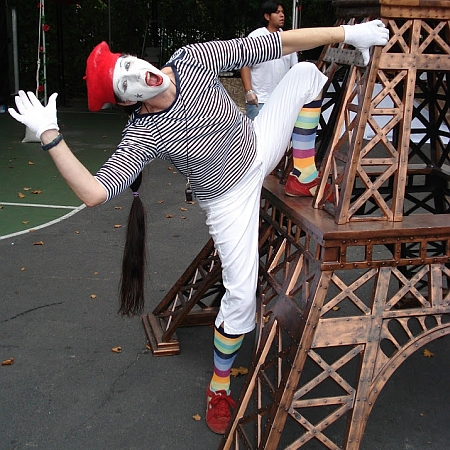 For over 15 years, this New York based Mime Artist has served as a successful solo entertainment act in and around the city. This specialty performer with a degree in dance and extensive training in gymnastic has established herself as an exciting specialty performer who has entertained famous clients including Britney Spears and Michael Jackson. Through the years, she has also developed a very close working relationship with top brands and corporations like Pepsi, Merrill Lynch, Jaguar, Goldman Sachs, American Express, Hewlett Packard and many others.

As a mime artist, she has mastered a number of characters, complete with personas and costumes. She can be a ring master or a Parisian. She can work a standard mime character or a very eccentric Pierrrot. Whatever the character, it is amazing how her silent acts can add loads of fun to any special event - be it Paris or French themed party, or a Circus type event.

Amid the blaring sound of New York, this amazing mime artist can certainly keep silent and hold her own. Perfect for any corporate event, product launch, and advertising campaign, her performance also adds interactivity to festivals, outdoor shows, and private parties.