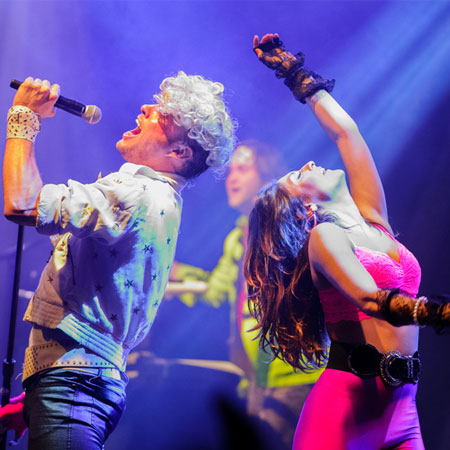 Prepare for the ultimate 80s tribute band! Hire our 80s party band for your event and treat your guests to a nostalgic ride through all of the decade’s biggest and best hits!

If you’re looking for 1980s themed entertainment that stays true to the era with neon clothing, spandex, led warmers and metal gear galore, as well as amazing vocal performances and plenty of soaring instrumental solos, our 80s cover band offer all that and more. Featuring state of the art sound and lighting equipment that come together to produce a fantastic live music performance with mesmerising visuals, our 80s tribute show is headlined by top rock and pop vocalists and musicians - many of who have appeared on Broadway, TV talent shows such as American Idol, and performed with big name music stars.

No 80s themed band would be authentic without an incredible set list and these guys do not disappoint, performing songs by the likes of Bon Jovi, Cindi Lauper, Michael Jackson, Madonna, Prince, and many more they offer up the best of the best when it comes to 80s music.

Bringing to life all the glitz, glamour and energy of the 80s, our 80s cover band re guaranteed to have everyone on the dance floor and singing along at your next event. Book our 1980s tribute band for corporate events in New York and worldwide, as well as festivals, theaters, VIP parties and weddings!