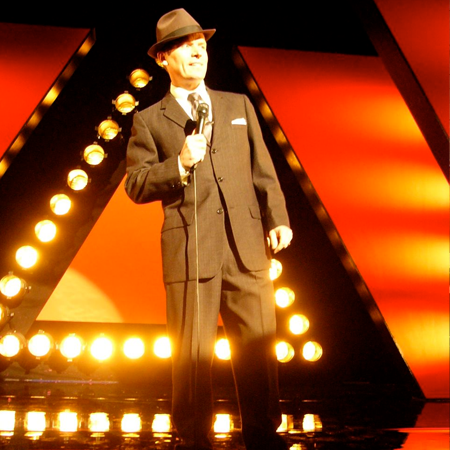 REASONS TO BOOK
One of the leading Frank Sinatra tributes
Available to perform solo or with a live band
As featured on BBC TV and Yorkshire Television
Performed at celebrity weddings inc Holly Willoughby
Based in the UK and available to perform worldwide
Tribute, Lookalikes and Impersonators, Rat Pack

This Sinatra Soundalike and Lookalike, is fast becoming a Cabaret sensation since forming his own live backing band to do it his way.

Booked to appear at venues all over England, he has made his overseas debut on tour in the Middle East (DUBAI), the tour was filmed by Yorkshire Television and made into a 30 minute Documentary, shown on T.V.at Christmas, called JUST TO BE FRANK. This was a big leap for Phil, covering his career from Karaoke to Cabaret. He has had numerous Radio and T.V appearances and also now appears in a book, named 'Morley Entertainers'.

This Frank Sinatra tribute has many forthcoming engagements to look forward to, singing the swing and love songs with his 8 piece band, quintet, trio & duo.  Available for T.V. walk-on’s, guest appearances, weddings, corporate events and anything else to make your occasion a very memorable one!

" An uncanny resemblance in both looks and voice, to the late Frank Sinatra... "