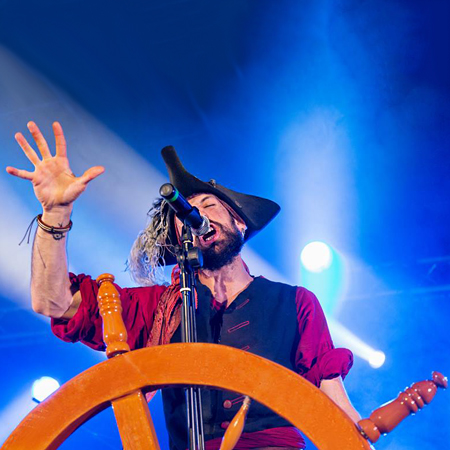 REASONS TO BOOK
A gang of hardy buccaneers with a live pirate themed show
Take inspiration from sea shanties to Celtic rock and much more
Costumed musicians play both modern and traditional instruments
Have played over 100 shows in France, Germany, Belgium and Italy
Based in Toulouse and available for events all over the world
Cover Bands, Live Music and DJ, Themed Entertainment, Pirates

Ahoy maties, grab yourself a bottle of rum and a dancing partner as this band of pirates is ready to cast anchor and bring some serious live music fun to your event and may even shiver your timbers.

Combining old styles and modern sounds our Pirate Themed Band France has a unique sound ever present in their live music. The pirate themed party band takes its inspiration from sea shanties, traditional music, Celtic rock, Irish punk and folk metal and fuses everything together into an upbeat, foot stomping performance. They have even released an album of original music.

During a performance with our Pirate Themed Band France, the fully costumed pirate crew will sing and talk about maritime legends, pirate stories, adventures inspired by the golden age of piracy creating an unforgettably immersive experience. The band of pirates' visually pleasing appearance and sound is augmented with instruments such as the Irish Bouzouki, Galician Bagpipes, flute and hurdy-gurdy.

You won't have to sail across the seven seas to find your perfect pirate themed party band as these hardy buccaneers are ready to come to you. Based in Toulouse and having caused rampage through France, this band of pirates has played well over 100 shows in France, Germany, Belgium and Italy.

If you are looking for the best live music for your pirate themed party, these vagabonds are a fantastic choice. Get in touch with our team of specialists at Scarlett Entertainment if you would like to book our Pirate Themed Band France for your event.