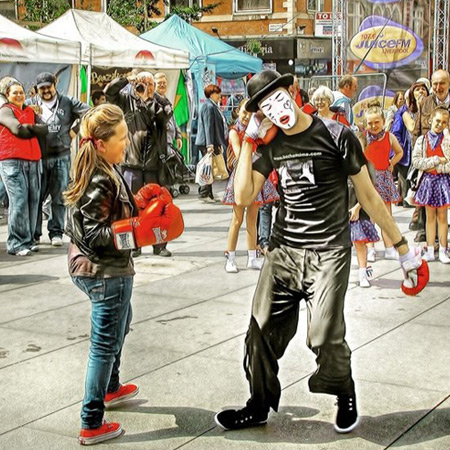 REASONS TO BOOK
Highly professional Mime Artist with over 17 years of experience
Performs a mix of shadow mimic, classic mime and comedy living statue
The perfect act to mix and mingle with your guests and clients
Has performed extensively at festivals, private and corporate events
Based in Manchester and available to perform at events worldwide
World and Cultural Acts, Mime Artists, French and Parisian, French, Walkabout Entertainment, Themed Entertainment, Street Theatre

Professional Mime Artist Leo started his career in Brazil at the tender age of 13 joining his brothers’ comedy group, “The Shadow Brothers.”

Whilst perfecting the art of comedic mime on the streets of Sao Paulo, the three brothers were discovered by one of Brazil’s largest television networks SBT. They went on to secure a permanent slot on a popular entertainment show which continued for 3 years. During this time the group also performed in schools, at festivals and for corporate and private events.

The Shadow Brothers have performed for 14 years and use a form of mime called Sombra that emerged from Latin America. Sombra, meaning shadow, involves the mime mirroring the movements and characteristics of people. As the mime is often behind the person he behaves like a shadow! This type of mimicry attracts a lot of attention and is very amusing!

After studying theatre with the prestigious Brazilian actor Northon Nascimento, Leo headed for Europe where he has spent the last 2 years performing shows in the streets of Madrid, Spain and The Algarve.

Today, Professional Mime Artist Leo has brought his talents to the UK, where he is based in Manchester and is available to perform his unique style of mime throughout the rest of the country.