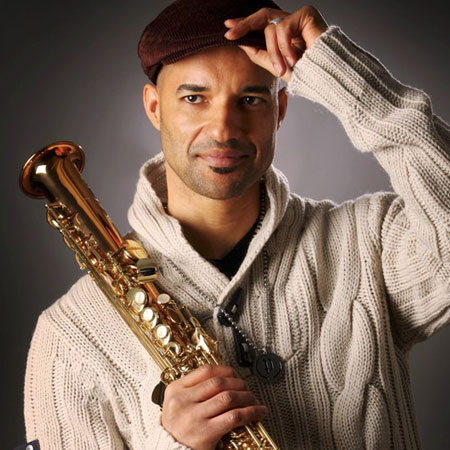 Julian graduated from Birmingham Conservatoire in 1991 with distinction in performance and teaching on his first study which was at that time Bassoon. He then was offered a teaching post with Sandwell MBA, and a part time post with Cheltenham Boys College.

He also at this time performed in various pit orchestras for musicals and shows including the Royal Shakespeare Company. Saxophone for Julian was also a great passion, and in 1993 he heard Kenny G for the first time and became instantly hooked on this instrument and in particular the soprano saxophone. Julian built a band around himself which became very popular in the Midlands area playing in restaurants, and prestigious corporate events on invitation.

Julian’s musical style could be described as easy listening “Crossover Classical/Pop/Smooth Jazz” as another big influence for his musical style is the vocal group “Il Divo”.

Combining performance on saxophone and teaching on clarinet and saxophone, Julian could now make a living as a musician/teacher. After producing a couple of self financed albums with producer and arranger Ty Unwin a track called Silver was placed on the multiplatinum compilation album called Classic Chillout series by Sony in 2001, and subsequently more tracks were commissioned from Julian over the next two years.

Frustrated without any further real success in the music industry after a period of six years, Julian decided to enter BRITAINS GOT TALENT IN 2009 and achieved second runner up placement with nearly 700,000 public telephone votes and millions of YouTube hits on the internet

A very special moment on the show for Julian was when the producers arranged for him to play with his idol Kenny G at the Royal Albert Hall, where Kenny G actually presented Julian with his own signature model saxophone as a good luck gift.

Since then Julian has toured many arenas and theatres, recorded with many Classical Stars including Julian Lloyd Webber and Paul Potts on the Classical Relief for Haiti Charity Single 'The Prayer'. He has performed for Prince Charles at Clarence House and was even invited to play for the Prime Minister, and has attended many other prestigious charity events including ARK, THE RED CROSS and RAYS OF SUNSHINE.

" "WE’VE ALL BEEN COMPLETELY BLOWN AWAY BY YOU" "