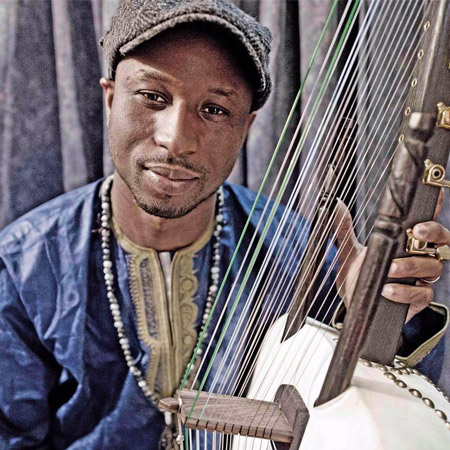 REASONS TO BOOK
Senegalese virtuoso kora player and vocalist delighting audiences with his wonderful traditional African instrument
Available for solo performances or live shows with his five-piece band
Excellent African music to delight audiences of all kinds
Performed at the O2 Arena, Royal Albert Hall, House of Parliament and The Royal Festival Hall
Based in London and available for events all over the world
Live Music and DJ, Themed Entertainment, Africa, Specialist Musicians, World and Cultural Acts, African

Our Senegal Kora Player UK is a virtuoso maestro at this traditional African instrument and is available to deliver its unique sounds to audiences in England and around the world. He is an excellent Kora player and singer who brings this old African instrument into the limelight. His music draws on his West Africa Griot heritage and its traditional songs to create his own mesmerising compositions.

Our Senegalese virtuoso kora player and vocalist provides his funky, jazzy and traditional sounds that can be booked for a wide variety of events either as a solo musician or along with his band. His five piece group bring a real West African groove to any event or function and his solo shows are a real delight to watch as the maestro perform so elegantly on this wonderful African instrument.

Since his arrival in the UK, the Senegal kora player has played a significant part in enriching the London musical scene with his griot legacy and luscious African grooves. He has been teaching the Kora at the Soas University of London for the last decade and he has also been involved in countless musical projects both as a collaborator and a session musician.

Our Senegal Kora Player UK has performed at The Royal Festival Hall, The O2 Arena, Queen Elizabeth Hall, National Theatre, Royal Albert hall, House of Parliament during the bio-centenary of the slave trade, Clarence House as part of a cultural reception hosted by the Prince of Wales as well as countless art centers, theatres and festivals including Woodstock with the Afro Celt Sound System to an audience of 750,000. He has also performed all over the world and appeared on TV and radio programmes.

If you are interested in booking our Senegal Kora Player UK for your event, please contact our team at Scarlett Entertainment.