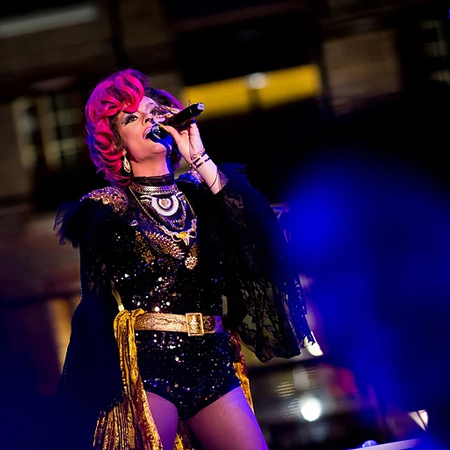 Our fabulous drag queen, Kara, will bring glitz and glamour to your event. The gender illusionist is a singer that brings show stopping entertainment to your party and makes sure the audience is fixated on her performance. This gender equality activist will quash many of the dated drag queen stereotypes.

A singing drag queen that is a natural entertainer with a knack for delivering classic, sophisticated high energy and theatrical performances. This entertaining vocalist has a large repertoire of covers from old classics to modern pop songs. Our drag queen sings from a collection of covers by the likes Michael Buble, Adele, Lady Gaga, Grace Jones and some of her own original songs too.

Entertain your guests with this stunning and glamorous female impersonator at your event or party. If you’re after a singer that will bring a fun yet sophisticated touch to the event then look no further. With plenty of experience performing at hen parties, community festivals, charity and corporate functions and even headlining the Sydney Mardi Gras Fair Day. This high quality singing drag queen makes a fantastic addition to after dinner shows, private functions, community occasions and corporate events. From a stage show, roaming act and event event hosting our drag queen is versatile in many ways.

Kara has adopted the term of gender illusionist, came to the public’s attention in 2016 with her appearance on Australia’s Got Talent performing her version of Feeling Good. Prior to her reality TV show appearance, she received countless awards and much recognition including Best Entertainer as part of ACON Time To Shine Awards held in Newcastle and resulted in being labelled as Newcastle's Queen Of Drag. The gender illusionist always comes very stylishly presented and delivers live music entertainment that will appeal to a wide range of audiences.

A talented drag act who is not only a top notch stage performing drag queen but also a committed gender equality activist. In 2015 she was invited to represent and march as the face of a leading Gay Activist Organisation and has also been a spokesperson for Leukaemia Foundation, Cancer Council and Food Within.

Speak to one of our team today to book this exceptional singing drag queen.