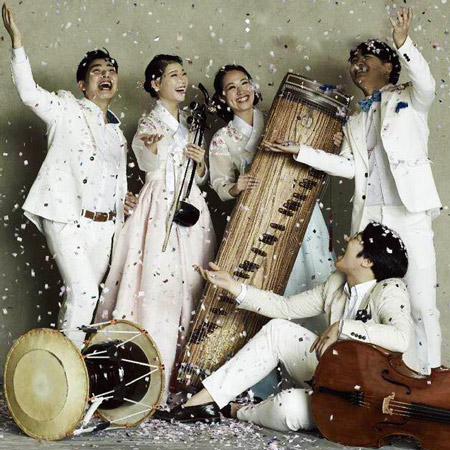 REASONS TO BOOK
Amazing fusing of traditional Korean and contemporary musical sounds
Young musicians use a variety of authentic Korean and western instruments
Accessible Korean entertainment for all types of audience
Performed at Edinburgh fringe and events all over the world
Based in South Korea and available for events worldwide
DJ with Musicians, Live Music and DJ, Themed Entertainment, Chinese, Oriental and Chinese, World and Cultural Acts, Specialist Musicians

The charming five-piece South Korean Fusion Band will take your guests on an exciting musical journey. The band has a unique blend of contemporary and classical music that takes strong musical influence from traditional Korean music and a variety of western jazz, pop and much more.

The South Korean Fusion Band keeps strong roots to its culture by bringing the main focus of their live music to traditional Korean instruments such as the gayageum, haegeum and a mixture of western and Korean percussive instruments. These are accompanied by the cello and electric piano creating a unique band sound.

The Seoul-based Korean Fusion Band’s live music is an exciting bonding of styles and visually captivating show that offers the listener and completely different experience. The young musicians base their compositions and covers on traditional Korean music whilst exploring jazz and even international pop music. They have a stunning rendition of Dave Brubeck’s Take Five as well as a medley of Queen’s Bohemian Rhapsody and A-ha’s Take on me.

The unique band has performed internationally with tours in Japan, the USA and Australia. They were also invited to perform at the Edinburgh Fringe’s Korean Season.

The young, stylish and unique band makes a fantastic addition to a wide range of events from corporate dinners to cultural celebrations. They have a range of costumes the range from formal to traditional, which coulf be tailored to the event.

Speak to our Entertainment Experts to book the South Korean Fusion Band for your event.