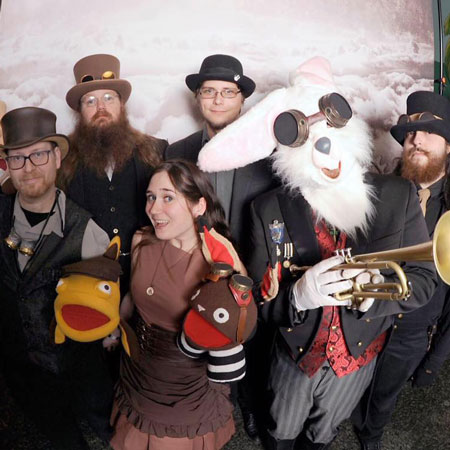 Our high energy steam punk puppet band electrify audiences with their sci-fi rock music making them the ultimate cosplay band for all events. This band provides rock music with a twist!

Scarlett Entertainment’s steam punk band deliver an Alice In Wonderland dreamscape atmosphere as this puppet band is lead by a six foot trumpet playing rabbit! As well as featuring puppets on vocals and a deranged mad scientist, this cosplay band is truly perfect for any event that want rock music with a difference.

Winners of the 'Peoples Choice Award 2015' and 'Artist of the Year 2016’ in the Ventura County Music Awards - our band create fantastic entertainment for the whole family, which has been widely accredited amongst both audience and industry specialists. Our Steam Punk Puppet Band is the perfect entertainment for theme parks, comic book conventions, family functions, county fates and all sci-fi events. In 2014 the cosplay band were nominated for the 'Weirdest Band in the World', so if you want something out of the ordinary, this band is the band for you!

Not only does the band generate a fantastic atmosphere and a never seen before vibe but they also work extremely well within circus themed events to create a real freak show attraction. This sci-fi rock band perform covers of hard rock tracks to keep with their deep rock theme which is electrifying and thoroughly entertaining.

To book this exciting and unique act contact our Entertainment Specialists.

" The Band took us to a moment that rarely happens in life: a celebration that is everything a good about the human experience…friendship, creativity, dance, joy, costuming, history, love, admiration, genius and humour. I could see it in peoples eyes. "