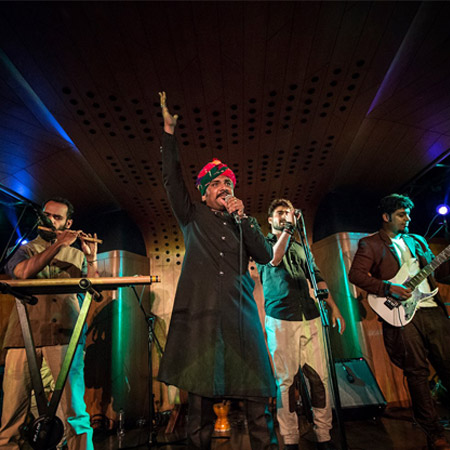 REASONS TO BOOK
Brilliant Sufi rock band will amaze audiences with their eclectic and powerful sound
Talented Indian folk band combine traditional Sufi music with western folk and rock influences for a fresh and dynamic sound
Sensational Indian folk music blends eastern and western styles for a performance with a wide ranging appeal
Have performed to sold-out audiences at clubs and venues all over India including Bluefrog, Habibi and Phoenix Markey City
Authentic and modern Sufi band available for performances all across India
Indian and Bollywood Music, Bollywood and Indian, World and Cultural Acts, Live Music and DJ, Themed Entertainment, Indian and Bollywood

Book our sensational Sufi rock band and experience a vibrant and lively performance that has a style and sound all of its own. This unique and talented Indian folk band combines elements of traditional Sufi music with folk and western rock to create a dynamic and engaging sound that will give audiences a powerful and captivating performance unlike anything they’ve heard before. Guests at any event, club, party or performance will be amazed by the stylish performances from this Sufi band and will appreciate the huge range of styles, influences and instruments incorporated into their music.

Our folk rock band are masters of their craft and will impress any audience with their incredible musicianship and their fresh and exciting original music. For a brilliant performance that gives you both an authentic Indian folk music experience and a modern, powerful rock performance, our Sufi rock band is the perfect choice.

This talented and passionate Indian folk band are rapidly making a name for themselves as one of the most dynamic and forward thinking bands in the Indian music scene and their traditional and modern sound has a wide ranging appeal. Featuring traditional Sufi band instrumentation and vocals alongside modern rock guitars and drums, this folk rock band are equally confident in performing both ethereal Indian folk music and powerful, uplifting folk rock.

The stunning blend of eastern and western influences mans this Sufi rock band are sure to have an international appeal and their electrifying performances have amazed sold out crowds all around India including venues like Bluefrog, Phoenix Market City and Inorbit Mall.

Scarlett Entertainment features a brilliant selection of Indian music and Bollywood themed entertainment to suit parties, weddings, corporate functions and events of all shapes and sizes. Contact our team to arrange booking one of our brilliant acts.