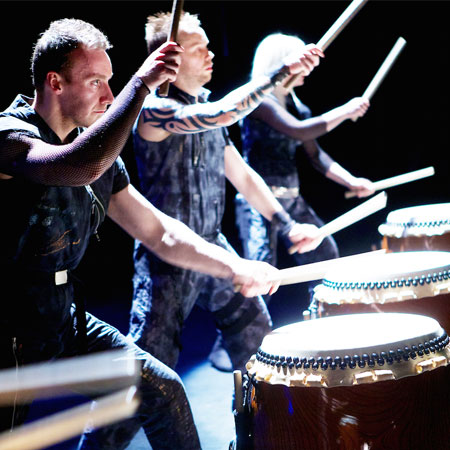 REASONS TO BOOK
Hard-hitting, energetic and theatrical Taiko Drumming Group
Powerful rhythms on an array of instruments and layers of percussive sounds
Watching them perform is an invigorating, life-enriching experience
They perform with a very modern twist on the traditional folk art
Based in Scotland and available to perform at events worldwide
Japanese Acts, Drumming and Percussion, Live Music and DJ, World and Cultural Acts

Taiko Drummers are the UK's longest established taiko ensemble, and Europe's only professional touring company of this thrilling & energetic performing art. With over 1,000 performances across the UK, Japan & Europe over the last decade, they have established a solid reputation for their gritty passionate style, setting themselves firmly at the forefront of Taiko drumming on this continent through their rigorous touring.

The drummers present Taiko as a modern & theatrical performing art, with precise choreography, dramatic lighting, and a variety of costumes ranging from the post-apocalyptic industrial to gorgeous earthy silks. The concert is extremely diverse: powerful rhythms on an array of instruments from small hand-held drums to the thunderous reverberations of the huge Odaiko big drum, delicate bamboo flute, soulful voice, layers of percussive soundscapes, and innovative dance tightly integrated with the taiko drums.

While the art form is originally from Japan these Taiko drummers are a completely western group and perform with a very modern twist on the traditional folk art. In the last 12 months they have performed at 3 weddings in Thailand, China and the UK and can tailor the set to suit the client. Previous tours have included a full-length theatre concert, performing at prestigious venues including London Queen Elizabeth Hall, Gateshead Sage, Cardiff St. David's Hall, Nottingham Royal Concert Hall, Brighton Theatre Royal, Glasgow Pavilion Theatre, and the Edinburgh Usher Hall amongst others. The group also perform on outdoor stages at a wide variety of music festivals, produce commissions for large-scale multi-media events, have released a range of CDs & DVDs, and have appeared on television programmes such as the Brit Awards & BBC Last Night of the Proms.