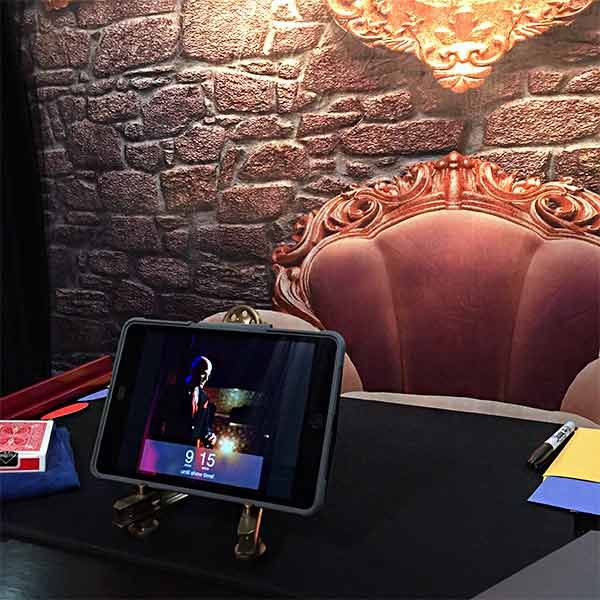 REASONS TO BOOK
A virtual interactive show specially created for live streaming that will keep audiences engaged and entertained throughout the online experience
In high-demand, this magician can tailor performances to include branding or specific company messaging if required for your virtual zoom event
Has received stunning reviews from the New York Times, the London Times and Gothamist.com among others
Virtual shows can be either pre-recorded or live-streamed on your virtual platform and will include many interactive routines
An ideal online entertainment option for your virtual corporate party and online zoom event
Virtual Entertainment and Performance, Virtual Magicians, Virtual Entertainment

1. What will the show involve?

The show will begin by welcoming the guests, checking cameras are on and guests audios are muted. The magician will then go into the first routine which involves an audience member making a series of free choices.

The second routine involves an audience member selecting a playing card from a pack. The card is returned to the deck, which is then shuffled and cut several times. Two other audience members generate a number between one and fifty-two. With the cards spread out on the magician's table, he will count slowly and deliberately to the chosen number and reveal the selected card.

For the third routine, he will ask an audience member to think of an animal and then reveal that he had predicted their choice in advance. He will then make another prediction regarding the outcome of a coin flip that is totally under the control of an audience member.

In his fifth routine, an audience member makes a series of guesses to determine the contents of several opaque envelopes and guesses correctly every time.

The next demonstration involves an experiment in direct mind-reading, in which several audience members are asked to display pages of books they own and the magician will select several words from the pages displayed. A member of the audience is asked to select and remember one of those words. He is then able to tell them which word they've thought of.

He may integrate additional routines depending on the length of the show.

For the finale demonstration, he will work out a very difficult mathematical equation while blindfolded. Audience members are involved throughout the demonstration and their choices determine the order in which the equation is solved.

2. Can the show be customised for clients?

Yes, the show can be customised to the client requirements. Depending on the level of customisation, the magician will require 2 weeks to prepare.

3. Can the show be either pre-recorded or live-streamed?

Yes, he can create pre-recorded videos for your audience or do a live-streamed show.

4. Where will the show be and what is the setup?

The show will be streamed or pre-recorded in a professional, in-home studio. He will use professional equipment, including numerous LED and halogen lighting instruments, a professional backdrop, a video switcher, a lav mic, and multiple cameras.

The cameras used will include a Canon C100 with a 24-70 L-Series lens to provide great resolution and clarity. He will also use an overhead camera a few times during the show.

5. What levels of interaction are there with live audiences?

The show is completely interactive. Every routine the magician does involves the direct participation of at least one audience member, and many require the active participation of multiple people. He will interact with them by asking them to make choices.

6. What platform will the live steam be on?

Our magician is happy to use Zoom (prefered), Google Meets and Streamyard.

7. How long is the virtual show?

Our magician has 2 versions of his virtual show, one is forty-five minutes and the other is sixty minutes.

8. Do guests need anything to be able to participate?

Yes, participants need to have a few things within reach in order to get the most out of the show. These are common, everyday items that don't require any special arrangements or purchases, such as a coin, a book, a calculator (or the calculator app on their phones) and a pen and paper.

" A masterclass in card magic and mentalism "