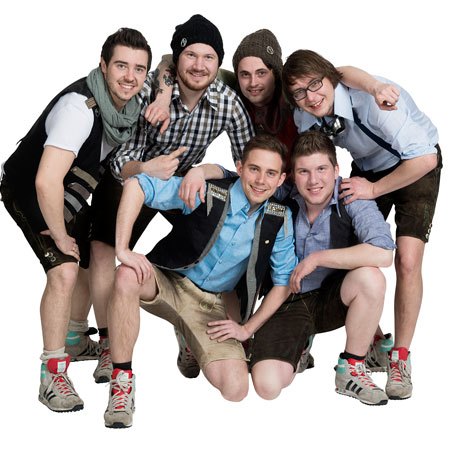 Since their big break in 2012 as finalists of the famous Austrian TV Show ‘The Big Chance’ this band have soared to fame. Having won the support of the show’s jury and the hearts of the voting nation they have gone on to reshape the Austrian folk music scene and perform at Andy Borg’s “Silvesterstadl”, Springbreak in Croatia (Europes biggest party), and Snowbreak in Schladming.

Rocking stages across Europe in their lederhosen and jogging highs these six lads have entertained audiences young and old with their unique and distinctive crossover folk music style. Their live performances radiate energy and create a buzzing atmosphere that rivals many well-established global boy bands.

They have already had chart success with the release for their first studio album, which is critically acclaimed for its extraordinary musical arrangements, sophisticated songs and distinctive character.

Completely unforgettable this six-piece boy band will blow guest away at any event!