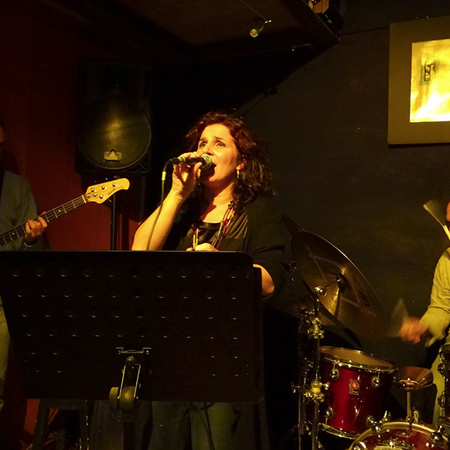 This quartet offers a repertoire of popular contemporary Brazilian music by composers whose harmonics echo innovative jazz and traditional Brazilian influences (samba, choro), in a departure from the classic bossa nova form.

The band are heavily influenced by their favourite composers, such as Joao Bosco and Guinga. Bosco, because of his dynamical fusion of Afro-American and samba sounds with the theatricality of Minas Gerais in the 1970’s and Guinga, because of his extremely effective blend of deeply traditional music with the newest harmonics, creating solutions that confirm him to be one of the greatest contemporary composers of popular Brazilian music.

The quartet also includes pieces by Caetano Veloso, Ivan Lins and Chico Buarque. Resulting in an extremely rhythmic and inviting fusion of Brazilian music and jazz, a repertoire that offers an extremely personal approach to their songs.

The band’s first CD, ‘Coisa Feita’, was dedicated to the music of Joao Bosco and Guinga and was released in 2013.  In July 2013 it was featured on Controradio in Florence and again on Radio 1 in Rome during the very popular program ‘Brasil’ conducted by Max De Tomassi.