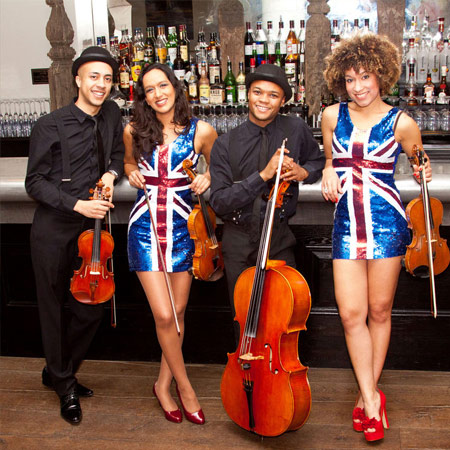 The British String Quartet was created especially for the Queen’s Diamond Jubilee and London 2012 and performed to much acclaim at major public and Olympic Sponsor events including, the Thames Diamond Jubilee Festival, The Olympic Park and a 10-night residency at the Royal Opera House.

The ultimate in Cool Britannia, this Union Jack attired quartet play classic Britpop and British music with a unique orchestral twist. The Quartet’s Best of British set features young, culturally diverse players who are some of the best classically trained musicians in London.

This versatile string quartet plays genres as diverse as Brit pop to dub step and drum and bass. The repertoire for this set includes their own unique versions of iconic British pieces by artists such as Queen, the Beatles and The Verve. They also put our own urban orchestral twist on TV and film themes including Doctor Who and James Bond.

As an additional option, either a male or female vocalist who performs British pop classic hits by artists such as Oasis, Coldplay and Elbow can join the group.

The quartet can also be accompanied by specially created iconic London and British visuals, which can be projected behind the group and have the option of being mixed live by a VJ.

" Thank you to you and all of you for making our annual summer ball a special one. Our board of directors have said it’s the best summer ball they have attended in years! Everybody loved the British quartet playing with the fireworks, not only did they look fantastic they played beautifully and the timings were right on cue. "