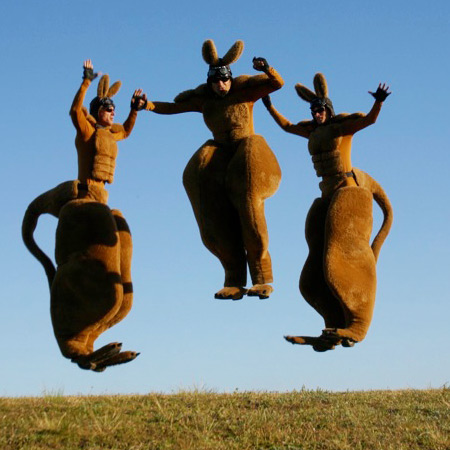 Giant Bouncing Stilts have provided shows and walk around entertainment at corporate events and parties for some of the world’s largest companies. Including Microsoft, Coca Cola, IBM, Disney, Kraft, Mastercard, Qantas, Nokia, Sony, Harley Davidson, Foxtel, Bloombergs, Optus, Vodafone, Chinese Amway, Maquarie Bank, to name just a few. The company has a proven record of professionalism and reliability with there spectacular acts…

Giant Kangaroos:
Jumping a metre off the ground and 2 metres in a bound, they’re a phenomenal sight with their cheeky blend of outback macho and inner city punk savvy!

These kangaroos are a favourite at festivals: so far they have appeared in countries all over the world, making them one of Australia’s most successful independent creative exports.

Beach Patrol:
Sharks beware! These Beach Patrollers are ready to rescue. Marvel at their mouth to mouth! Be dazzled by their daring drills! You'll need CPR after these moustachioed musclemen have bared their biceps while diverting danger. Swim outside the flags at your own peril.

Bouncers:
Need to keep a crowd in line? Don’t panic: leave it to the bungling Bouncers. These boys are proof that in this industry, size matters — but not if you’re talking brains.

They can also provide many other giant bouncing characters, including elves to all kind of sport characters. They can custom make characters as per request and are as adaptable as they can be to make your event as unique and successful as possible!