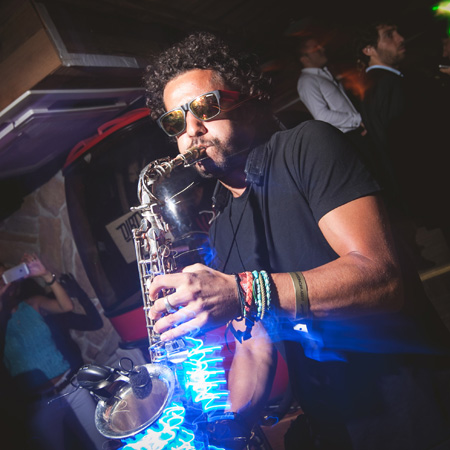 This LED Saxophonist has been entertaining audiences since the tender age of 10. His natural musical ear and incredible freestyle versatility allow him to feel as comfortable when raising the roof peak time in super clubs worldwide, to playing soothing grooves alongside chill out rhythms at the more relaxed daytime and evening events. Everything is always 100% improvised and the LED Saxophonist creates his rhythms and riffs from following the journey of the DJ and bouncing off the atmosphere from any venue.

His recognised talent has led him to obtain residencies in venues around the globe and most recently he has won Best Entertainer at The London Bar & Club Awards! In addition to this, he was a featured artist on the 2012 Ibiza Beach Music Album by Ushuiai Ibiza and has had his very own single being played around the world!

With his unique stage presence including a custom built sax, which provides a full LED light show, club give-a-ways and a permanent smile. The LED Saxophonist is now rightly becoming one of the most in demand freestyle saxophonists in Europe with over 1000 performances worldwide to his name & growing!