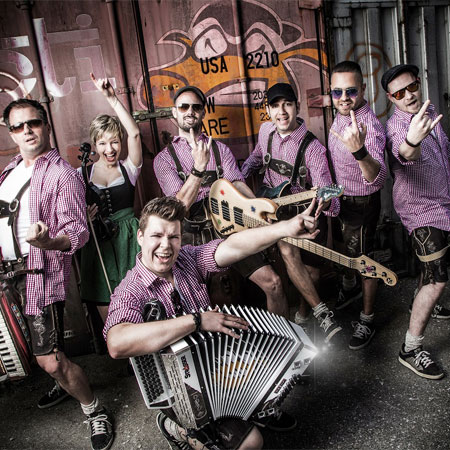 This high-energy party band will create a fun Oktoberfest atmosphere at your event no matter the time of year! Formed from seven young talented professional musicians, this band provides high-calibre entertainment that has earned them a reputation for being one of the best party bands in Austria!

Their highly interactive show sees audience members getting up on stage signing along with the band and members of the band performing on the dance floor alongside guests. Playing from an extensive repertoire that features everything from traditional and modern Volksmusic, to ‘Apres-ski’ hits, to huge international classics by the likes of Bryan Adams and Bon Jovi it’s no wonder that they have a proven track record of packing dance floors of any size.

Dressed in classic Austrian dress - both traditional and modern - they raise one hell of a storm. Providing guests with an unforgettable live entertainment experience, this band will be the highlight of your event!