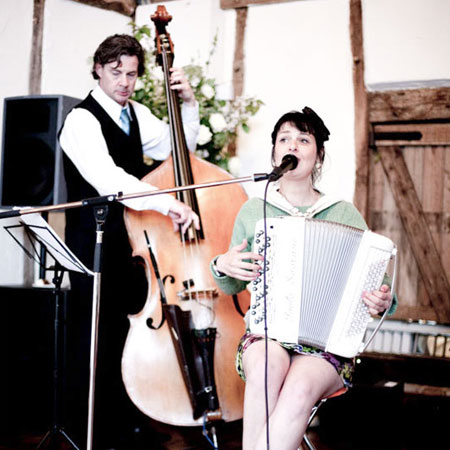 Charming and sophisticated London based acoustic quartet, amplified according to your requirements. They perform instrumental and vocal songs ideal for listening and dancing to.

Their huge repertoire includes classic jazz, "Musette" (Parisian folk), "Chansons Realistes"(made famous by Edith Piaf), Chansons Francaise (French songs originally sung by Nougarro, Gainsbourg, Jeanne morreau, Henry Salvador, etc...), and selected pop tunes. The quartet are available with a range of line-ups including solo accordionist or as a duo or trio.  They can also walk around the tables as they play for that "Je ne sais quoi" feeling.

Collectively the musicians have played across the globe in Europe, North America, Japan, Australasia and the Far East.  Closer to home they have played at all major hotels and restaurants in the UK including The Dorchester, The Grosvenor and The Ivy.

They have performed at music venues including Ronnie Scott's, the Royal Opera House (Covent Garden), Wilton Music Hall, the Queen Elizabeth Hall and the National Theatre.  The group have also played on the Orient Express, at the West Sussex Game Fair, and on boats including the Q.E.II and the Belle Vallee on the River Seine, Paris.

Their television appearances include Top of the Pops 2, Holby City and Children in Need (Canada).  They have played alongside Gilbert O'Sullivan, Stacey Kent, Gerry Marsden and Tina May, and had the pleasure of playing before Sirs Paul McCartney and Bobby Charlton, Steve Coogan and soon, hopefully for you!

Musician are also the perfect choice for a countryside wedding or an Italian party as part of their repertoire includes Italian music and American jazz standards. The band's accordion player can also be booked as a solo player or alongside a clarinet or guitar player.

If you're interested in booking these acoustic musicians for your event, then contact us today and make an enquiry. Our in-house team of Entertainment Experts will be more than happy to assist you in the booking process.