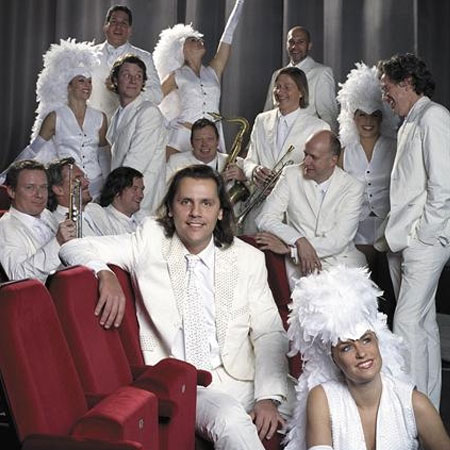 The Swedish based Showband was formed in 1984 in Stockholm and has performed countless shows and tours all over Scandinavia. In more recent years the band has performed in France, Germany, Spain, Greece and have made several tours to Singapore, Malaysia and Thailand.  Their long career has now been crowned by performing at the Royal wedding of H.R.H Crown Princess Victoria and Daniel Westling.

The bands unique blend of Soul, disco and jazz flavoured with Las Vegas, Frank Sinatra and glamour have made them the number one entertainment orchestra in Sweden and their international rennomée is growing fast.

The eleven piece band is a dance machine led by band leader and singer Richard Hager. Rooted in 70's and 80's disco and spiced with a big band feel with influences from easy listening, classic soul and funk the band delivers a powerful sound and the five-piece horn section sometimes like Basie, sometimes like Earth Wind and Fire is one of the bands great fortes!

The Showband often perform with other artists and have the glamour events as its speciality and have played at venues ranging from living rooms to football fields!

The band has it's own ballet with up to eight dancers for that really over the top Vegas feeling! More white feathers to the people!