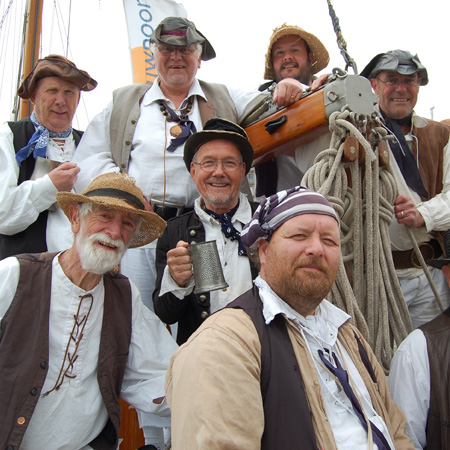 REASONS TO BOOK
Sea shanties sung with gusto and forebitters, delivered with pathos
Played at The Tall Ships Regatta in Wateford and 2012 Olympics in Weymouth
Appeared on national television and radio both in the UK and in Europe
Presented with most authentic shanties award at the Krakow Shanty Festival
Dressed in period costume they encourage the audience to sing along
Live Music and DJ, Themed Entertainment, Irish,Ceilidh,Folk and Country, British Theme, Under the Sea and Beach Themed, World and Cultural Acts, Pirates, British, Harmony and Acapella Groups

Devon’s “original buoy band” were formed in 2007 to breathe new life into the rich maritime heritage of their home port. They have since ventured further afield, bedecked in the garb of early C19th merchantmen to put borrowed songs back on to a tall ship’s deck or into a dockside tavern. Their repertoire splices together shanties sung with gusto and forebitters, delivered with pathos.

The Sea Shanty Band are increasingly in demand at home and abroad and have played the main stage at several major UK folk music festivals, as well as appearances at Plymouth Pavilions, a nightclub in Soho and many a village hall.

They played at the 2011 Tall Ships’ Regatta in Wateford, Ireland and at the 2012 Olympics in Weymouth. They will be playing the Tall Ships’ again in 2014 at Falmouth.

The band are an award-winning shanty crew, having been presented with the Stan Hugill Trophy for the “most authentic shanties” at the very well respected, International Krakow Shanty Festival. Besides Eire and Poland, they have also visited Germany and Holland and have made a number of tours to France and Belgium.

They have appeared on national television and radio both in the UK and in Europe.